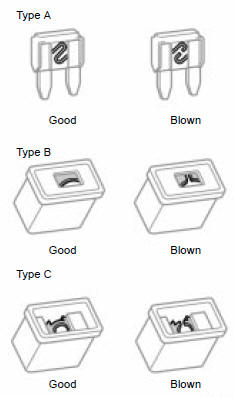 If the headlights or other electricalcomponents do not work, check thefuses. If any of the fuses are blown,they must be replaced.

See “Fuse locations” on page 397 forlocations of the fuses.

Turn the hybrid system and inoperativecomponent off. Pull the suspected fusestraight out and check it.

Determine which fuse may be causing theproblem. The lid of the fuse box showsthe name of the circuit for each fuse. Seepage 435 for the functions controlled byeach circuit.

Type A fuses can be pulled out by thepull−out tool. The location of the pull−outtool is shown in the illustration.

If you are not sure whether the fuse hasblown, try replacing the suspected fusewith one that you know is good.If the fuse has blown, push a new fuseinto the clip.

Only install a fuse with the amperage ratingdesignated on the fuse box lid.

If you do not have a spare fuse, in anemergency you can pull out the “DOME”or “OBD” fuse, which may be dispensablefor normal driving, and use it if its amperagerating is the same.

If you cannot use one of the same amperage,use one that is lower, but as closeto the rating as possible. If the amperageis lower than that specified, the fusemight blow out again. but this does notindicate anything wrong. Be sure to getthe correct fuse as soon as possible andreturn the substitute to its original clip.

It is a good idea to purchase a set ofspare fuses and keep them in your vehiclefor emergencies.

If the new fuse immediately blows out,there is a problem with the electrical system.Have your Toyota dealer correct it assoon as possible.

Never use a fuse with a higher amperagerating, or any other object, inplace of a fuse. This may cause extensivedamage and possibly a fire.